The IR-diode at Pin D3

For this project, you need the component behind today’s door: the IR diode. It looks like a simple LED, but it sends light in the invisible infra-red range. The IR-signals are visible to a digital camera, however. The structure of today’s experiment is shown in the figure. Don’t be surprised that the IR-LED is not given a dropping resistor. The effective dropping resistor is the On-resistor of the port, at approx. 30 Ohm. Because of this, the current through the diode is quite high, but the impulses sent are so short that the diode will not take damage.

Before the program can work, you need to make some adjustments again. If you read out and used the codes for Power, Volume up, Volume down, Channel up, Channel down and Mute yesterday, you can simply enter these codes into the irCommand array in sequence. Otherwise, install yesterday’s programme again and read out the matching codes. Of course, you may use entirely different codes as well. The labels on the website will not match then. In addition to the codes, you also need to enter the protocol used in the variable irProtokoll if your remote control is supported. Last, you need to enter the length of the signal to be sent. Determine it by multiplying the digits of the hex code by four. Example: My code for Power was 0x20DF10EF. 0x is simply the sign for a hex code, which leaves 20DF10EF and thus an eight-digit hex code. 8•4 = 32, i.e. in the example program, the variable irLen means 32. A similar calculation is needed for a code with another length.

Once you have entered all codes and parameters, and of course also your WLAN data, you can upload the program. The website of the board now contains six buttons that are labelled accordingly. When you push one of the buttons, a message should appear on the Serial Monitor and your TV or other device should react to the signal correctly. If not, you may need to get closer or check if the IR diode sends anything at all. An LED connected with the wrong polarity would be one possible reason why a project is not working as desired. 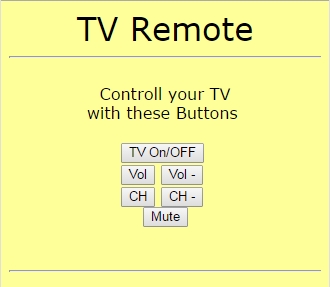